The biggest and the most significant boat racing festival (Boun Xuang Heua) in Laos is held at the end of Buddhist lent (Awk Phansa) in Vientiane, on the Mekong River. This is known as Vientiane Boat Racing Festival and it is more or less a national festival.

The Vientiane Boat Racing Festival is held every year, starting from the 15th day in the 11th month in lunar calendar.

The actual race is held on the 16th day, with heats starting early in the morning. Over 20 dragon boats and rower/paddler teams line up for the race on the Mekong River. The entrants come from all around Laos to compete in this significant festival. 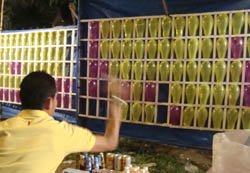 Fa Ngum road, the road along the Mekong River bank, and other streets leading to the river are lined with stalls days before the actual festival starts. These sell all kind of clothes, food (especially grilled chicken and sticky rice cooked in bamboo pipes), fruits, and drinks. There are also sideshows, such as pop-the-balloons, where small prizes can be won all over the place.

On the race day, the town comes alive with noise and festivity as the teams make their way to the river either by truck or walking, banging drums and singing. The streets to and along the Mekong River bank are very crowded as thousands of spectators cram along to cheer their teams. 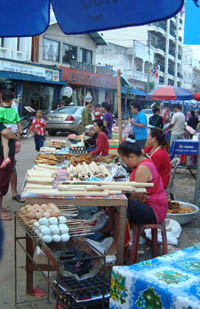 Lovers of this sport (yes, boat racing is a sport) make sure they get the best spot on the river bank. When the boats are racing down the river, you will hear people cheering, yelling, and banging drums along the river.

It is fun to observe and even more fun if you dare getting on the boat and be part of the rowing team. Click here to find out how to join.

Usually the races start with the women’s teams, followed by the men’s teams. The final round happens in the afternoon and sometimes it carries on until late in the afternoon. The winner in each category receives prize money and a trophy. After the races finish, the prizes are presented to the winners by high ranking officials.

The races and the prize presentation are forecasted live on the Lao national TV channel.

How to join a team

Usually it’s quite hard to find out how to go about doing something in Laos unless you know some key people as events are often not advertised.

The Mekong River Commission (MRC) assembles a team to take part in the race every year. This is an open mixed-gender team and many locals and expats working/living in Vientiane join in the fun even if they do not work for the MRC. There is a small fee to join though (I mean small) and that covers the cost of a T-shirt and a cap as well as food and drinks on the race day.

If you are interested contact: +856 021 263 263, email: mrcs@mrcmekong.org. You might need to do a bit of explaining of what you want as the person at the other end of the line might not know about it (staff movement rate is quite high), so ask for someone on the Staff Association and eventually you’ll be directed to the right person.

It is easier if you know someone who works at MRC. Ask them to introduce you to the organiser. Either way you have to act early, at least one or two months before the festival, as it is important to join in the practice sessions.

There is also a women’s international team, which rows with the women from one of the local villages. Details about how to join this team are normally posted in local shops or sometimes in the events section of the local paper, the Vientiane Times. This team welcomes any women, experienced or not and provides a good way for people to join in at a local level as you will be included in village activities as well sometimes such as traditional boat racing festival at village level.