That Luang Festival
or Boun That Luang

The Golden Stupa or Pha That Luang is the national symbol and most important religious monument in Laos and Vientiane’s most important Buddhist festival is Boun That Luang. Traditionally, the That Luang festival is held over three-seven days during the full moon of the twelfth lunar month (November). Nowadays, the festival also includes a trade fair which starts a few days prior to the actual festival days. 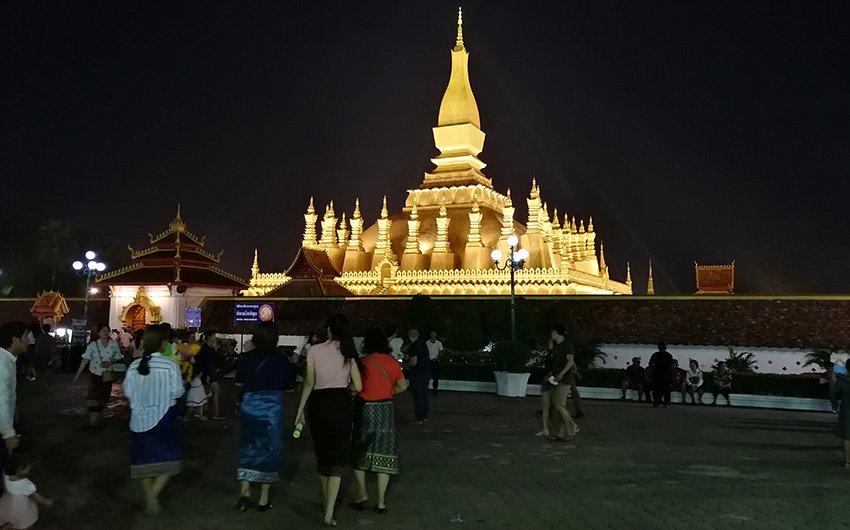 The festival starts with a colorful candlelight ‘wax castle' (phasat ) procession which starts in the evening before at Wat Simeuang, where groups gather and walk three times around the main hall of worship in honor of the Vientiane city pillar, which is located at this temple. As the home of the city’s founding pillar, the Wat is considered one of the most important in Vientiane. According to legend, when the pillar was laid, a pregnant woman, Nang Si inspired by supernatural forces, threw herself to death under the pillar as it was being dropped into position. Nang Si is now seen as the guardian of the city and every year homage is paid to her and Lord Buddha during the festival. As well as the castles, they carry candles, incense and flowers, beat drums and cymbals and sing as they walk around the Wat. 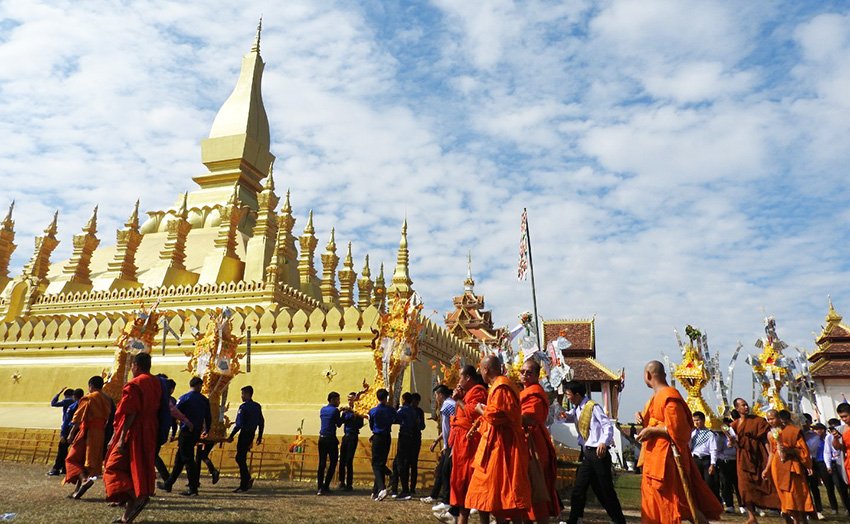 The “wax castles” are not really castles, but tall creations of yellow “trees”, with wax petals and which are festooned with gold paper and kip notes.

The procession continues the next afternoon when thousands of people gather to bring their glittering creations to pay homage at That Luang. People wear their best clothes for this procession and there is also a parade of men and women dressed in various Lao ethnic costumes who dance and play traditional music and songs as they approach the stupa.

On reaching the stupa, the worshippers slowly walk around it three times in a clockwise direction, led by monks from Wat That Luang chanting the ancient words of Buddha.

The whole country looks forward to this most important of Lao festivals, and people come from far and near to revere and celebrate That Luang.

Many Lao living abroad come back to visit their families in Laos during That Luang festival period. I'd also recommend anyone who plans to visit the country to come this time of year. For those interested in Lao culture, it is a good opportunity to observe the culture through Lao festivals.The weather is also nice and cool (no rain), the city, especially Vientiane, is more lively. However, as this is peak time for tourists, hotels are often booked up. It is a good idea to book your hotel in advance.

The so-called wax castles have been a part of Lao lifestyle for many years, and bringing one to Pha That Laung on this occasion is believed to bring considerable merit. 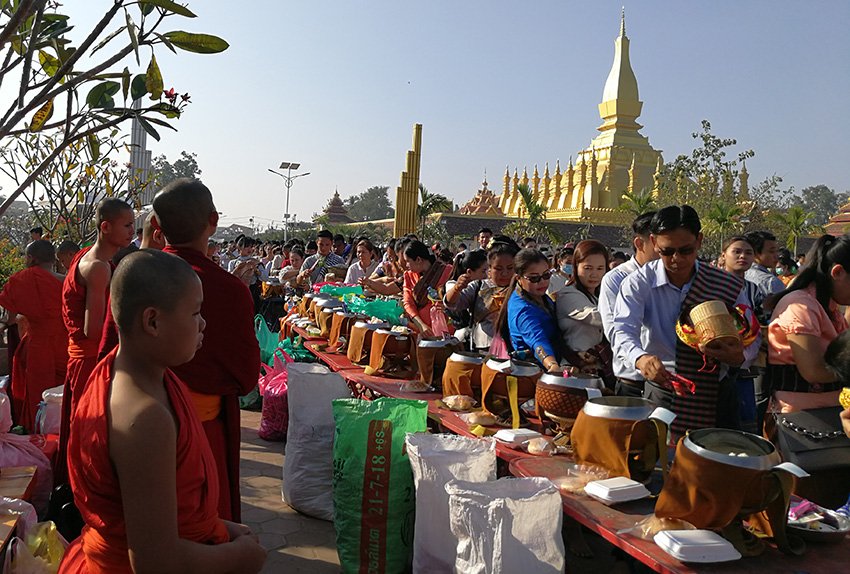 Alms offering at That Luang Festival

The following morning a huge crowd assembles at dawn That Luang to give alms to hundreds of monks who come here from around the country, and to pay homage to the stupa. The celebrations known as taak baat begin at 7am in the grounds of the That Luang, but crowds begin arriving at the stupa before 5am to secure the best positions inside the cloister, to pray and prepare their offerings. Both inside and outside the cloister, That Luang’s esplanade is full of monks who assemble to receive their offerings. 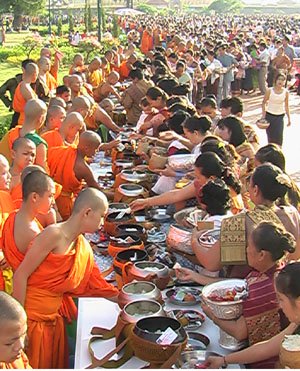 During the alms giving ritual inside the cloister and on the esplanade outside, everyone sits quietly and listens to the prayers. Some people pour water on the ground to ask Ngamae Thorani (a female earth goddess) to tell the spirits of their relatives to come and receive their offerings, while others release birds from cages to make merit. Everyone tries to go inside the stupa when the formal part of the ceremony has ended to give alms to the monks, to light candles and incense and pray for good luck.

A traditional picnic follows, when people eat boiled chicken, rice and noodles and catch up with friends and families.

Tikhy or Lao Hockey Game Particular to That Luang festival

In the afternoon, everyone will gather on the esplanade for the traditional game of tikhy, which is played with a ball and long curved sticks, resembling a game of hockey. The game used to be played by two opposing groups, one symbolising the people and the other the establishment. Nowadays, it is considered a more light-hearted sporting event between two teams of the Vientiane municipality. Nevertheless, the procession to accompany the ball (louk khy) from the stupa to the grounds and back. 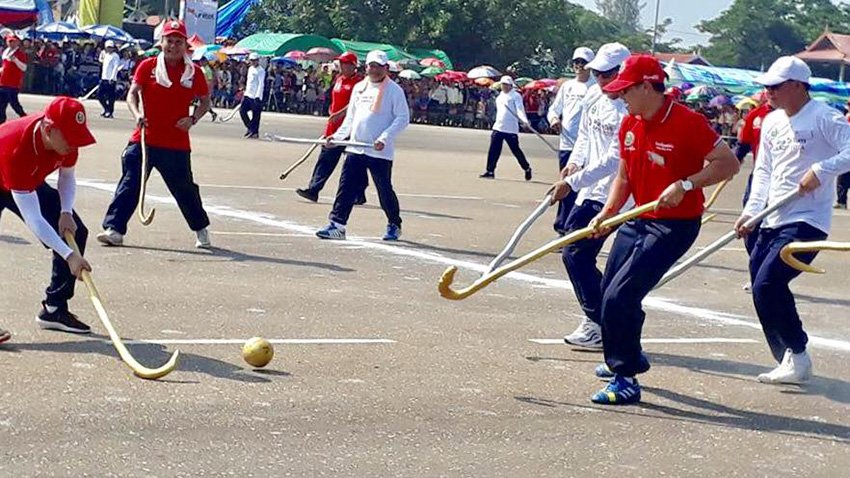 Lao traditional sport (Tikhy) is particular to That Luang festival

The festival draws to a close under a full moon, when people from all over Laos will crowd around the Pha That Luang (stupa) for one last candlelight procession, bearing posies of flowers, incense and candles. Normally these days there are also firework displays to mark the end of the celebration. Also during That Luang festival there are trade fairs and concerts and funfairs held around the esplanade.

More on Pha That Luang

Powered by GetYourGuide. Become a partner.