As most ethnic groups in Laos have their own dialects, Lao is an important second language for them as a central language to communicate with outsiders. There are variations in vocabulary, pronunciation and accent throughout the country.

Lao belongs to Tai-Kadai language family. Its written form was derived from Tham script which evolved from Pali language that initiated in India. The script was brought to the region by Theravada Buddhists at the time that Buddhism was growing in popularity around two thousand years ago.

The Buddhist monks used the Tham script to write the Dhamma (the Buddha's teaching). It was only taught to novices and monks in temples and that is why in the past only men (ex-monks) knew how to read and write. Today the Tham still exists in Laos and northeastern Thailand.

Through the years, adjustments were made to the script and it was used for Lao writing. And through various orthographic reforms, Lao script has gradually been developed into what it is today.

Lao is tonal language with six tones in the Vientiane dialect: low, mid, high, rising, high falling, and low falling. It consists primarily of native Lao words. However, due to the introduction of Buddhism, Pali contributed numerous terms especially those relating to religion. Many Pali borrowed words are seen in Lao language until today.

The Lao alphabet is phonetic. Words are spelt according to phonetic principles as opposed to etymological principles. In addition to consonants having tone classes, tone marks facilitate marking tones where they are needed.

There are 27 basic consonants and six compound consonants. The consonants are divided into three groups according to their tones.

The 28 vowels are divided into two main groups according to their sound (short/long sound) and a set of special vowels as following. 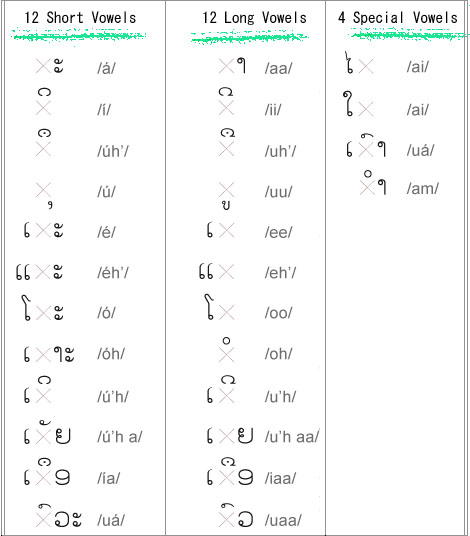 In the list above an "X" is placed there to designate the position of the consonant.

In Lao language, vowels can appear before, after, above, below and around consonants. Each vowel determines its placement eg. "

" always appears before the consonant and "

" always appears after the consonant, as in

Vowels that wrap around a consonant are actually two or more vowels combined to form a sound eg. the vowel "

Apart from these vowels, there are a lot more sound that acheived by combining vowels and consonants, for example if you combine vowel "

For more detailed information visit http://www.seasite.niu.edu/lao/lao3.htm. There are Lao language learning resources, exercises and MP3 to help you with prononciation.

In addition to consonants and vowels, there are 4 tone marks as following.

More details on tone marks, how they are used and more can be found at the website of Center for Southeast Asian Studies. http://www.seasite.niu.edu/lao/lao3.htm

Learning Lao alphabet is not difficult, however, writing can be fairly hard at the beginning as characters set are different from English not to mention composing words.

Most people learn to speak the language first, then they comprehend reading and writing later. If you want to follow that path here are some useful Lao phases to start with.

Practicing some phases with the local whenever there is an opportunity is a way to go. If you have fun and are comfortable using them then your Lao learning becomes easier and you maybe ready to move to the next level (reading and writing). Learning Lao yourself?  Yes, it is possible, it is not supper hard, all you need is your determination, a good Lao book for beginners and perhaps a dictionary.  Do a search on Amazone, I am sure there are a few good books to grab.

http://www.wazu.jp/gallery/Fonts_Lao.html - A wide range of Lao font are available for download.

There are many to choose from "Learn Lao ABC", "Learn Lao 123", "Lao words and phrases", and "Lao Beginner" just to name few.