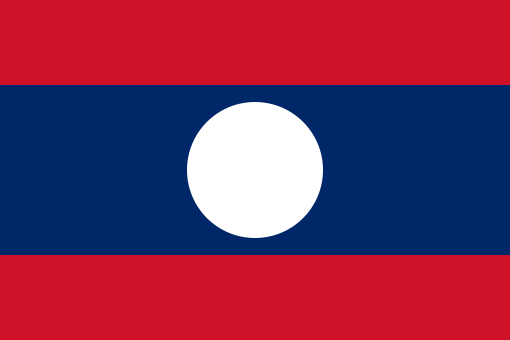 The current national Laos flag was adopted on December 2, 1975, when the communist Lao People's Democratic Republic (Lao PDR) toppled the King and took over the government.

The flag has three horizontal stripes, red stripes on the top and bottom, a blue stripe, whose height is double of the red ones, in the middle with white circle in the center of the blue stripe.

The Red stripes represent blood shed by the Lao people during the struggle for freedom and independence from the French.

The Blue symbolises the Mekong River, a symbol of the nation's prosperity.

The White circle in the center symbolises justice and the unity of the Lao people under the leadership of the Lao People's Revolutionary Party and the country's bright future. It is also said to represent a full moon against the Mekong River.

Background of the current flag of Laos

The current national flag was designed in 1945 by Maha Sila Viravong, a member of the Lao Issara government, a famous Lao nationalist, intellectual, and scholar of traditional Lao literature, history, and culture.

The flag was designed to be distinct from the royalist flag (three-headed white elephant flag), and it was adopted by the new government as its national flag in accordance with the establishment of the Lao Issara government and its first Lao constitution on October 12, 1945. The flag was in use until the French takeover in 1946.

As a political movement, the Lao Issara continued to use the flag in exile until its dissolution in 1949.

After that the flag was re-used by its communist-led successor, the Pathet Lao to represent the political movement until the fall of the royal government in 1975 when the Pathet Lao (now Lao PDR) re-adopted it as the national flag.

Laos Flag in the most recent history

Before Laos became the Lao People's Democratic Republic (Lao PDR) in 1975 the country's flag was red, with a triple-headed white elephant standing on a five-level pedestal.

The three-headed elephant flag was used from 1952 until the fall of the royal government in 1975.

The three-headed elephant flag represented the ancient name of the country, "Land of a Million Elephants".

This flag was adopted by the royal monarchy of Luang Prabang since the beginning of the 20th century under French rule, inspired by its similar flag (red flag with the single white elephant) in Thailand during that time. More flags in the history. 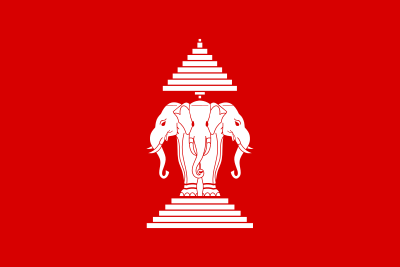 What does each symbol represent?

The five-level pedestal represented the law on which the country rested.

The three headed-elephant represented three former kingdoms Vientiane, Luang Prabang, and Champasak which made up the country.

The nine-folded umbrella on top of the elephant is said to be a royal symbol, originating from Mt. Meru in the Buddhist cosmology.