Boat racing is a local festival that takes place every year all around the country during September and October. Most Laos traditional boat racing festivals take place before the end of Buddhist lent. Dates vary from year to year, but most festivals are held on weekends.

Traditionally, after the rice planting season (toward the end of rainy season) villages on the river banks prepare themselves for the upcoming boat racing festival in and around their communities.

Dragon boats (long boats built specifically for racing purposes) are taken down from their houses onto the rivers. Teams of rowers start practising weeks or months before the boat racing season arrives.

In the countryside where Lao tradition still runs deep, every household in the host village prepares special food and drinks. One type of food that almost every household prepares for their guests are noodles (Khao Poon in Lao). As guests arrive at their houses they are offered some noodles and something to drink. This tradition has been carried on for generations and it’s also practised in boun pavet, and boun bang fai (rocket festival). It is still seen in city of Vientiane, but it is not as common and normally only happens among close families and friends.

Apart from providing food and drinks, the host village also needs to build temporary shelters for the invited guests and the rowing crews, to stay the night before the racing day. These shelters are as simple as bamboo huts or tents. Each family in the village contributes basic stuff like mattresses, pillows and blankets.

Generally all the rowing crews are provided with food, drinks and places to stay free of charge. This is the responsibility of every household in the host village as they are happy and excited to take part in the festival.

At the temple, the night, or sometimes two nights, before the race, an open air bar and dance floor are set up temporarily. All kinds of liquor (beer Lao, Lao Lao, or whisky) is sold and a live band plays. Teenagers, men and women from the host village and from villages nearby, as well as the crews enjoy themselves drinking and dancing into the night. 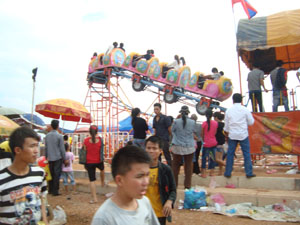 In the morning, the races start around 8 or 9am. Usually two boats race down the river for each heat. There are normally six to 10 boats participating in each festival and sometimes more if there isn’t another boat race festival taking place on that same day in nearby areas.

There are prizes for winners, though they are not much, because the heart of the races is not the prize but the fun everyone has.

The races finish in the late afternoon, but that isn’t the end of the festival. Regardless of the result of the races, the celebration carries on until late or until everyone is either drunk or exhausted. Well… this is a big event for locals and is only celebrated once a year, so they all want to make the most of it after working hard on their farms.