Pha That Luang
The History, Legend and Renovations

It is a centre of religion and culture and teaches people about Laos’ ancient culture and history.

The stupa is one of the most famous cultural landmarks in Laos, and one among the top tourist attractions and features some of the oldest archeology in Vientiane and the country. 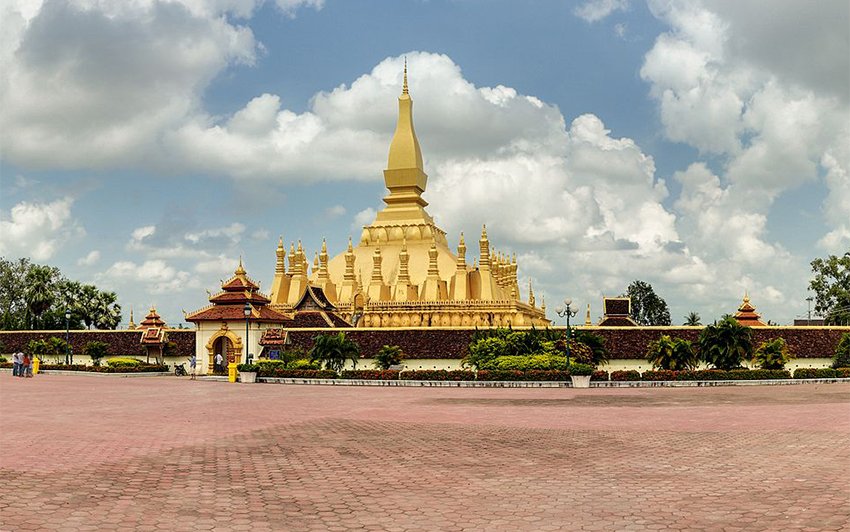 Every year on the 15th full moon day of the 11th lunar month (some time in November) the colorful That Luang festival is staged to celebrate the stupa and to honor both the stupa and King Xaysetthathirath, who the statue in front of Pha That Luang represents.

This is considered the most revered in Laos. People come from all over the country to engage in many traditional activities and ritual ceremonies to pay homage to the stupa. These include a ‘wax castle’ procession, almsgiving, a game of traditional Lao hockey, and candlelit processions. 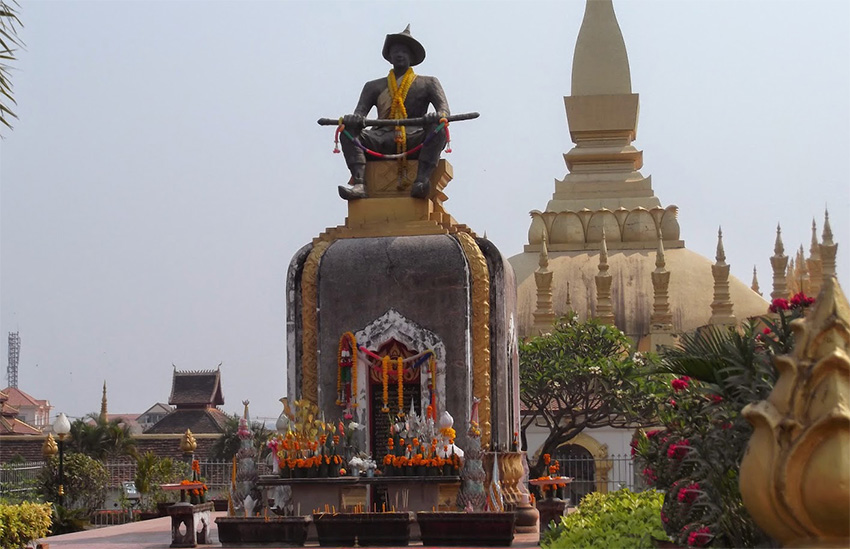 Pha That Luang: The History

The 45 metres high That Luang Stupa or Pha That Luang was originally built during the ancient Khmer civilisation, when Vientiane was inhabited by people known as the ‘Cham’.

Researchers believe the structure was originally a four-sided stone obelisk.

The site was built as a place for people to worship and pray to idol, according to the book That Luang Viengchanh, recompiled by Kavi in 1999. The structure was renovated during the reign of King Saysetthathirath in the 16th century when the original site was covered with a larger stupa. From then on, the monument took the name That Luang, or Grand Stupa.

The Cham period was the second wave of Buddhism and was a glorious period in Lao history. Under the patronage of King Ashokkamahalath of India, the venerable monks Sona and Outala and five scholars brought a piece of what believers understand to be pieces of the pelvic bone of Lord Buddha to Vientiane in 218 BCE, where it was kept at Phou Luang hill.

The ruler of Vientiane at that time, Lord Chanthabouly Phasitthisack or Boulichanh, built a stupa over the obelisk in 236 BCE. The sacred site was then named Pha Chedi Lokachulamany.

According to the legend of That Phanom Stupa, also known as ‘Tamnan Oulangkhathat’, King Ashokkamahalath authorized the relics to be placed inside That Luang Stupa in Vientiane. The same legend claims the remains of Lord Buddha were distributed to all corners of the globe where there were Buddhist followers and his ashes were put inside 84,000 stupas. This number corresponds to the 84,000 points raised for believers to study in the tripitaka (Buddhist scriptures).

In its early form, Pha That Luang was not as high as it is now, but after Lord Buddha’s ashes were placed at the site and a new stupa was built around the original obelisk, the monument took on its current shape and grew in importance as a place of worship for Lao Buddhists.

The current stupa is now 45 metres high and the base measures 69 metres in perimeter.

Pha That Luang: The legend

According to legend, which is supported by physical evidence found from the reign of King Jayavoraman VII, the original obelisk was indeed an ancient Cham construction that was built sometime between the 9th and 14th centuries.

Many artifacts have been discovered at the site including a statue of Jayavoraman VII dating from between AD 1181 and 1219, which is presently located at the northern end of the inner cloister.

The story of Pha That Luang became clear at the beginning of the 16th century, which is known among historians as the middle of the ancient Lao period. King Saysetthathirath ordered the construction of the current stupa in AD 1566, six years after designating Vientiane as the capital of Laos.

Previously, the capital was situated in what is now Luang Prabang (then known as Xiengthong). King Saysetthathirath built the grand stupa so the new capital would have an equally splendid place of worship similar to the Grand Stupa in Chiang Mai, which at that time was the capital of the neighboring Lane Na kingdom, now northern Thailand.

The king wanted to project himself as a patron of Buddhism and to achieve enlightment like the Lord Buddha, but before doing so he needed to make merit in all aspects of his life.

He also wanted a site where he could hold an annual festival that would provide an occasion to test the loyalty of his chief administrators from all corners of the Lane Xang kingdom. This festival would also pay homage to the gods and to King Fa Ngum, who is attributed with bringing the third wave of Buddhism to Laos.

Through this annual event, the king wanted the people of the Lane Xang kingdom to come together to make merit and observe religious practices, celebrate together and consolidate solidarity, strengthening the kingdom to ensure it remained intact.  The festival (now known as That Luang Festival) has been held every year since. 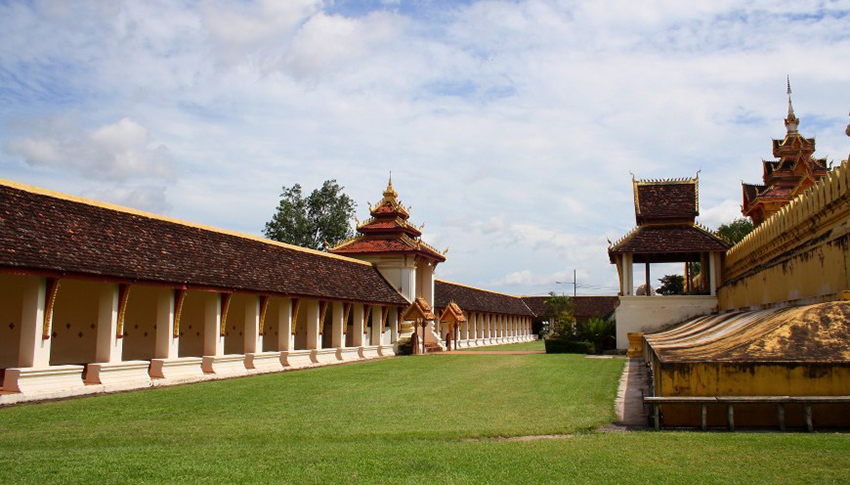 Inside of the cloister walls of Pha That Luang

Because King Saysetthathirath wanted to be a Bhothiyana, an enlightened one, he came up with the idea of surrounding the main stupa with 30 smaller stupas of equal size known as Palami (fulfillment of goodness) stupas.  At the base of each small stupa, a flattened plate of gold was inscribed with words depicting ariyasat (the four noble truths - the essence of Lord Buddha’s teachings). These plates also contain information of the date of the renovation of the stupa to its current size and can still be seen today inside the cloister at the eastern entrance of That Luang.

The wording on the fourth line of plates reads: “This stupa contains the ashes of Lord Buddha and was built by King Saysetthathirath. May it last for more than 5,000 years."

The revered sacred place has been worn out over time and damaged by wars perpetrated by foreign imperialists. Whenever the country was invaded, religious and sacred places of worship such as That Luang were among the first targets for looting and indiscriminate destruction.

The latest renovation took place in September 2016 and finish in time for That Luang Festival in November 2017.

Pha That Luang: The Renovations 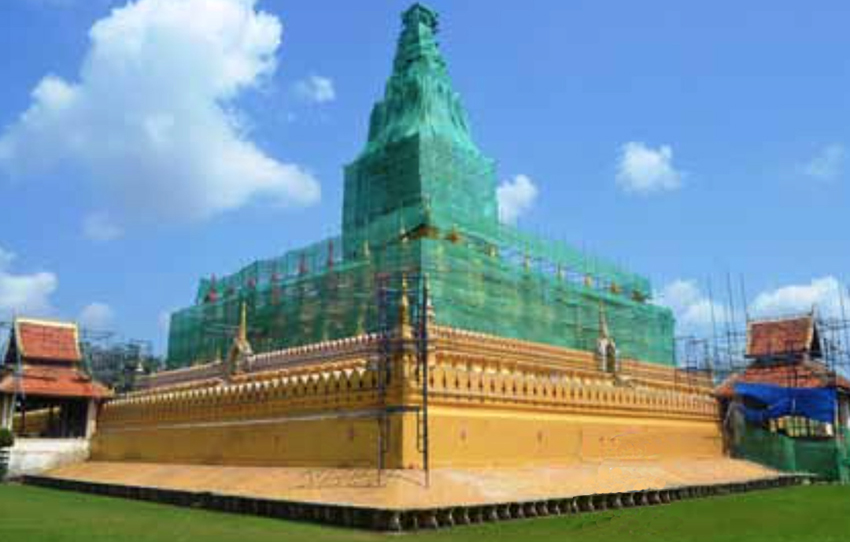 Pha That Luang in its renovation stage

The latest renovation took place in September 2016 and finished in time for That Luang Festival in November 2017. 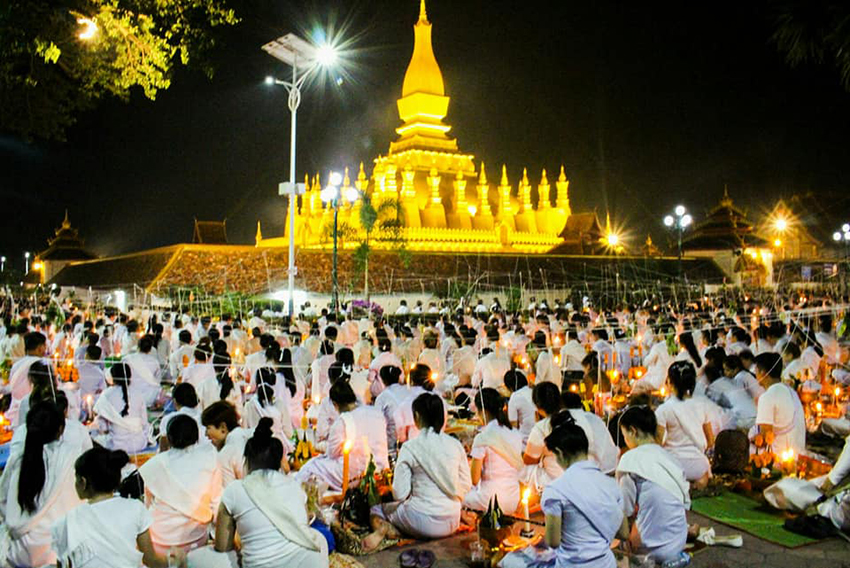 The recent restoration involves work to improve the main structure, paintwork, surrounding garden, drainage channels, electrical system and other features, notably the gold leaf that was placed on the top of the stupa with more than 10 kilogrammes of gold leaf on the central spire.

A few days prior to the 2017 That Luang festival, a Buddhist procession took place to worship the newly renovated Pha That Luang.

Part of this article originally featured in the Vientiane Times on 7 November, 2011.
By Ms Phon Khikeo

More on Pha That Luang