Traditionally, the rocket festival is held in the sixth Lunar month (around May or June) and is a ceremony believed to bring the rains so that rice planting can begin.

Celebrations typically take two to three days and include music and dance performances, competitive processions of floats, dancers and musicians, and culminate on the third day in competitive firings of home-made rockets.

The crowd gather to launch rockets 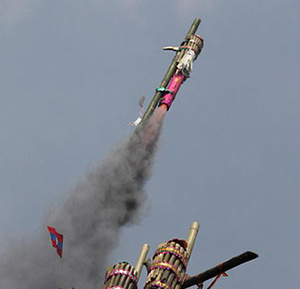 Large bamboo rockets are built and decorated by monks and villagers and carried in procession before being blasted skywards to let the God of rain, Phaya Thaen, know it is time to send the rains. The higher a rocket goes, the bigger the praise for its builder. Designers of failed rockets are thrown in the mud or a pond.

Many villages get together in an outlying area to fire these huge rockets into the sky, while those on the ground celebrate by drinking, singing and dancing. It is a big fun day out for all, although it can get a bit raucous and unruly at times. 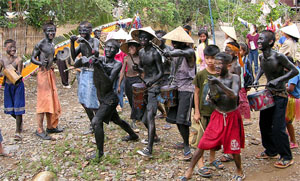 Also the God of rain Phaya Thaen, to whom the rockets are being sent, sometimes decides to rain on his own parade and the festival becomes a wet one.

One of the stories associated with the rocket festival is that of Phaya Khankhak, the Toad King.

In one of the Lord Buddha's former lives he was born Phaya Khankhaak, the Toad King. Because he was a good, kind king both humans and animals respected him. The news of this well-respected human king made the rain God, Phaya Thaen jealous and in order to humiliate the Toad King, he did not send the rain to the earth for 8 years and 8 months. Without water, people could not grow food and both they and their animals began to perish.


All the stronger surviving creatures on earth decided to fight Phya Thaen for rain. The Naga King and his Naga or mythical serpent troops volunteered to start the war against the God of rain, but they lost and received many wounds. After the wounds were healed, the Naga and snakes' bodies became multi colored. 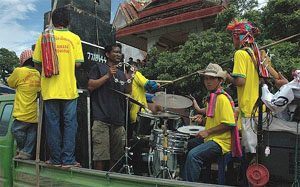 All other creatures were very afraid. Finally, the Toad King decided to go to instigate a three step plan. First he sent termites to eat the handles of the swords owned by the rain God and his army. Then he sent the King of Scorpions and his troops to the sky to hide themselves in the firewood and clothing of the Gods and Goddesses and be ready to bite at any time. In the morning when the rain God and his soldiers woke up, they would be bitten when they took their firewood and when they got dressed.

When they took the handles of the swords, all handles would be destroyed and broken and become useless.

Finally, the Toad King ordered his troops to begin the fight. Because the rain God's soldiers had been bitten by the scorpions, they were not brave enough to fight. When they took the weapons, all their weapons became useless. The Toad King chased after the God of Rain, caught him and tied him up. Then the two made a peace treaty which demanded that every year, before the rainy season arrived, humans had to prepare the rockets and send them to the sky to remind the God of Rain to supply the rain for their rice fields and other crops.

They said that when the rain arrived, the frogs had to shout out, signaling that there was plenty of rain available for rice planting. And when the harvest season arrived there should be flute playing, so when the rain God heard the sounds he would know to stop sending the rain and wait until he saw the rockets again.