Yes, there is city bus system in Vientiane.

In recent years much work has been put into improving it, thanks to the government of Janpan (or JICA project) for their bus donation and for the work they put into enhancing the capacity of Vientiane Capital State Bus Enterprise to make Vientiane city bus widely availalbe, more reliable and more comfortable.

Most buses running in Vientiane city and surrounding suburbs originate in the Central Bus Station (CBS), located next to the Morning Market (known as Morning Market or Talat Sao bus station).

A new city bus line between Lao ITECC and Talat Sao (Morning Market) recently started (November 15, 2017). The bus for this line originate at Lao-ITECC, and the final stop is in front of Talat Sao Mall1. 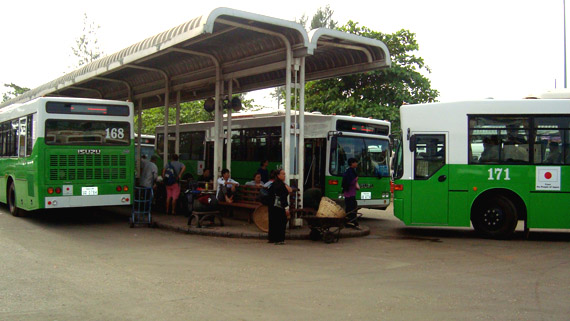 The buses used for city buses are 45-seat (green white), 25-seat and electric vehicles that look like sightseeing buses.

The Japan-donated 45-seat buses are air conditioned and mostly used for longer distances and more demand routes such as to Dong Dok, the Lao-Thai Friendship Bridge, Thangnon, and Dong Kham Xang while 25-seat and electric buses run within the city and on the shorter routes.

Frequency and reliability of City buses

There is a bus every 15 minutes for popular routes like Dong Dok and the Lao-Thai Friendship Bridge, and every 20-30 minutes for others. Although delays may occur during rush hours, the service is more reliable and more people are using it now than in the past.

The service begins at 5:30am and ends at 7:00pm everyday, though some lower passenger demand routes have fewer buses and have shorter service hours (start late and end early).

How to catch city buses in Vientiane

Apart from catching the buses at Central Bus Station and designated bus stops, it also can literally be flagged down anywhere along the routes. .

At the bus station - Even though the city buses are clearly numbered and marked both in Lao and English, it still can be confusing because there are no clear signs to follow (at the bus station).

Asking staff at the ticketing windows is the best and quickest way to find the right bus (it worked for me), and I’d recommend it. 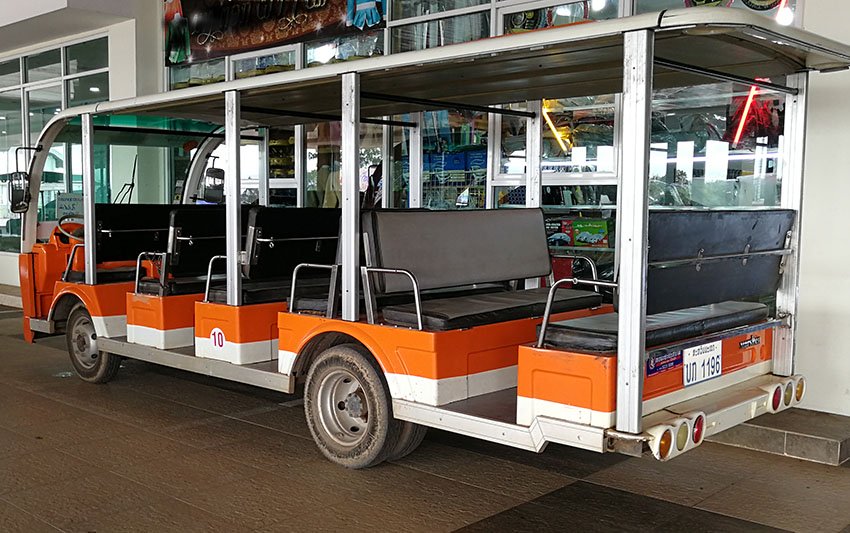 At designated bus stops - A number of bus stops (with shelters and seats) have been built in recent years, but most don’t get used much because buses don’t always automatically stop at the bus stops. And don’t expect to find bus timetable or route maps at most bus stops.

If you need to catch a bus, just wait at the bus stop or some where on the roadside, and give a sign to the driver by sticking out your hand to wave the bus down.

Please note that while the statements "It’s acceptable to flag down a bus in between stops" is true, The Lao ITECC - Talat Sao line will strictly stop at its designated stop. This is one of the efforts made to improve bus system in Laos.

It’s acceptable to flag down a bus in between stops. It is a common practice because in Laos buses are not very frequent especially in suburbs. If you miss one you might have to wait a long time for the next bus, that’s one of the reasons the drivers are not so strict.

Although catching a city bus in Vientiane might not be your most exciting experience, it’s a good way to observe locals' ways of life and it gives you a difference perspective of Vientiane. It’s also cheaper, safer and more comfortable than riding in a tuk tuk in my opinion. Why not give it a try. 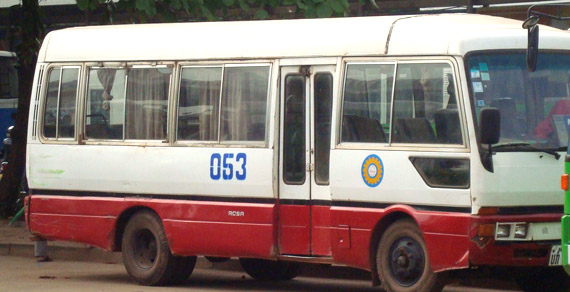 Getting on the bus - Boarding the bus from the doors that opened by the driver. Don't worry about paying or buying ticket just yet, just find your seat or standing spot (if all the seats are occupied) and enjoy the ride.

Getting off the bus - When you want to get off the bus, press the nearby aligthing button or verbally let the driver know and he will pull over where (or close to where) you whan to get off.

Pay the fee - Before getting off the bus, give cash to the driver. If you're a student and use Student Bus Pass (SBP), touch it to the reader or present it to the driver, and off you go. 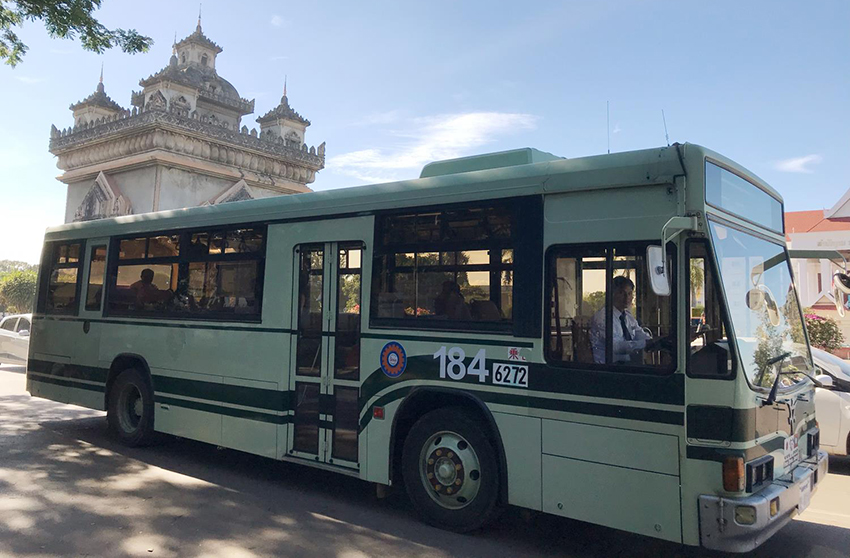 There are a handful of bus routes in Vientiane city, all city buses depart from the Central Bus Station (CBS) and pass through a few places as listed. There is a route map that you can download in PDF too (scroll down) 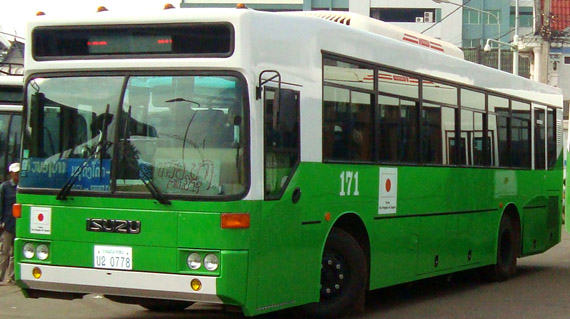 *The buses do not go into the airport but it's only 5 minutes walk from the main road.

This line was previously run by electric vehicles. From November 27 onward, they will be permanently replaced by Kyoto Buses. 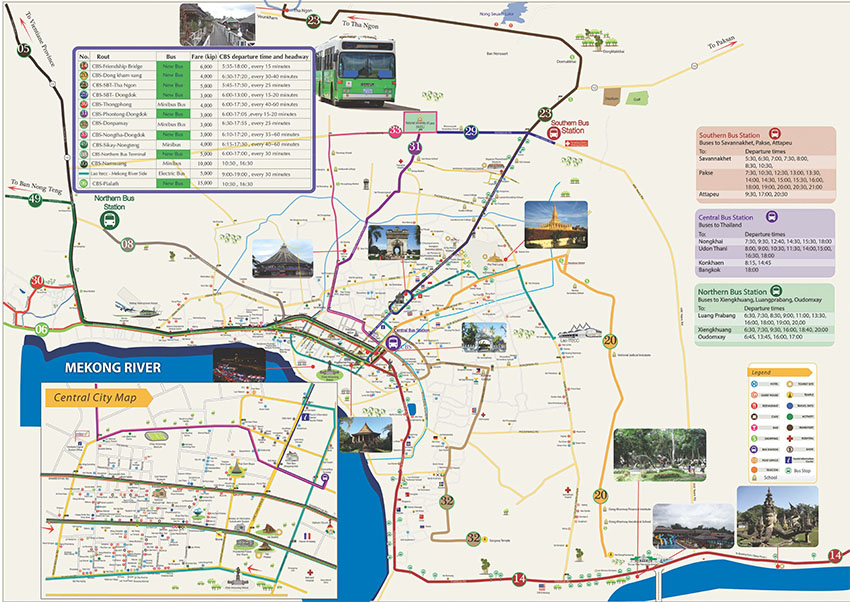 Regular City Bus routes. Click on the map to open it in pdf 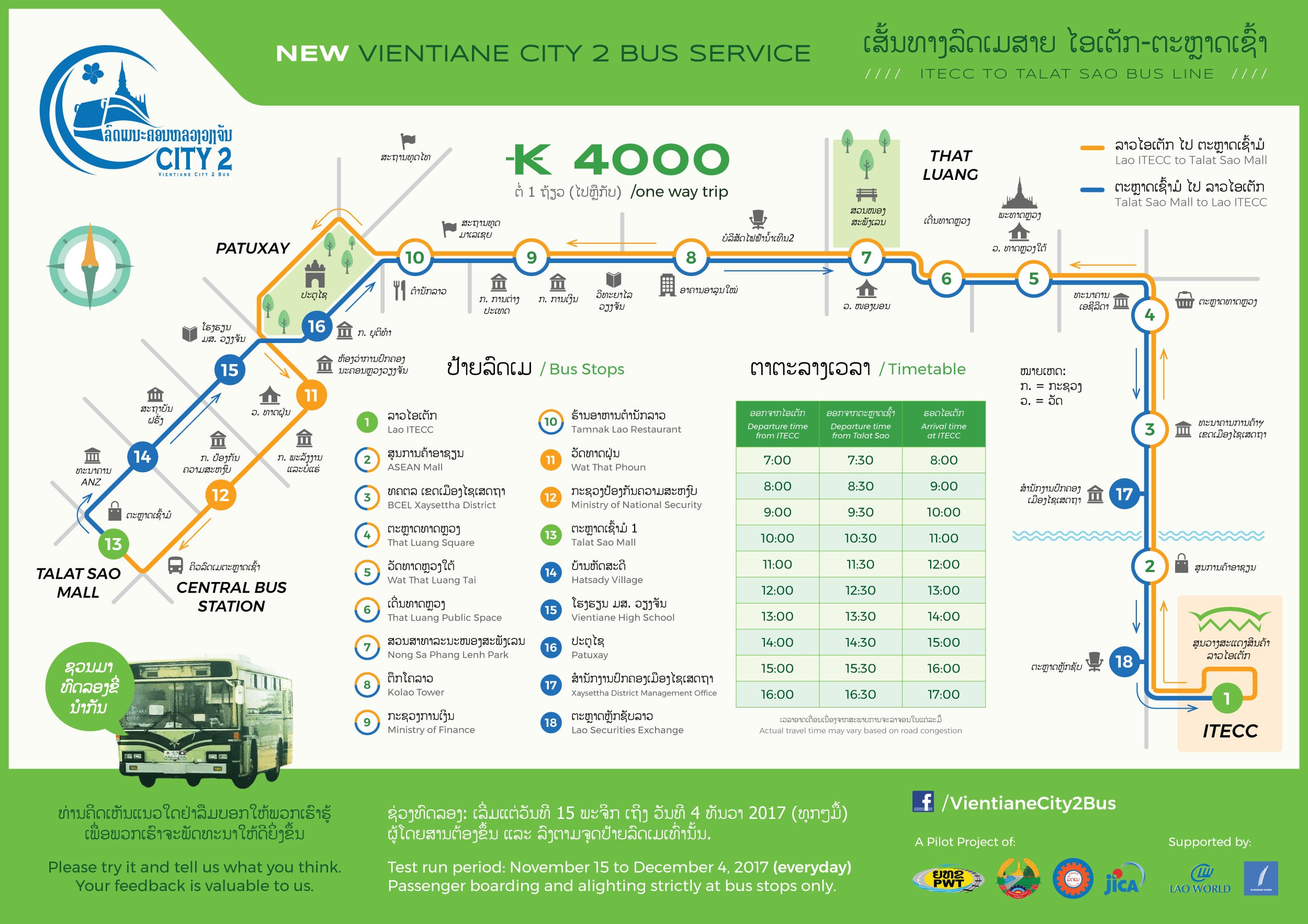 Lao ITECC Bus line route map. Click on the map to open it in PDF 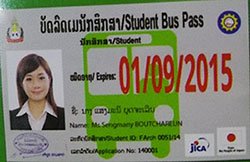 What is Student Bus Pass (SBP)?

SBP is a card for students to use for bus rides instead of paying cash everytime. They just need to pay up front once when they register and they can use it for 1 month, 3 months, 6 months or 1 year.

As the name implies, the card is for students only. It is designed to help them to save money on thier transportation cost as well as to make their bus trips convenient.

SBP card can be used with all bus routes that operated by Vientiane Capital State Bus Enterprise (VCSBE). It can be used as often and as many times as needed until the card expires.

There are four(4) options to chose from:

How to apply for the card

You need to present your SBP everytime you get on the bus. Only buses that operated by Vientiane Capital State Bus Enterprise (VCSBE) accept the SBP card.

Your SBP card can only be used by yourself, it CANNOT be lent or sold.

If your SBP card is lost or stolen, you need to inform VCSBE. They can re-issue the SBP card for you with a small service fee. No refund or exchange can be provided.

Now you can get the Bus Location System via your smartphone.

With the Bus Location System, you can see bus position in real time that makes it easy for your bus catching venture. You don't have to get out of your house to wait for the bus long before it arrives. Just get out when you see the bus moving closer to your bus catching point.

The bus routes are color coded so it's easy to identify. Just click/touch the line that represents the route and information such as destination and fares will pop up.

You can also select a destination from drop-down list to see the position of that particular route. You can switch between Lao and English.

App for smart phone is also available, check it out in Play Store or  App Store