Are there cross country buses in Laos?

However, there are buses connecting all provinces throughout Laos with a bus hub in Vientiane for buses travelling from north to south and the other way. If this is your idea of a cross country bus, then yes, there are several.

If you want to travel by bus, for example from Luang Prabang (in the north) to Pakse (in the south) you need to take a Luang Prabang-Vientiane bus (around 7 hours, cost 130,000kip), then take another bus from Vientiane to Pakse (around 10 hours, cost 150,000kip). There is no direct route. 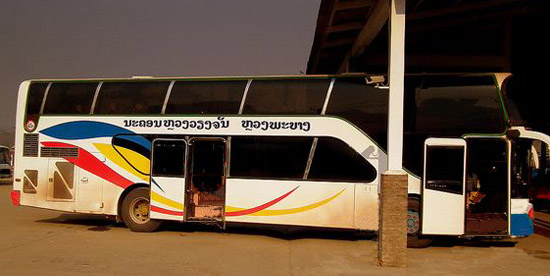 This might be one of the questions that pop up when thinking about travelling by bus in Laos. It’s totally understandable. Safety is always a concern when you first arrive in a new place and you have no idea whether taking buses is a good option, especially in places less developed like Laos.

Well… it would be biased if I said it was absolutely safe. Laos is just like any other country in the world, there are good and bad people everywhere. You never know if the bad guys are also on board. So… take care, keep your valuable stuff such as passports, credit cards, money, phone, camera and any electronic gadgets with you at all times to reduce the risk of pick pocketing. Don’t flash around wads of cash or fancy jewellery and always be alert to what’s going on around you and you should be fine. 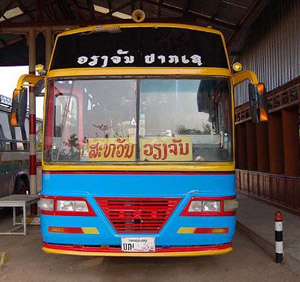 Most roads connecting main cities frequented by tourists are in reasonable condition.

The busiest road in the state is Road 13 which begins at the Chinese border and goes deep into the South (to the Laos-Cambodia border). This is the main highway and most cross country travels happen on this road, but the busiest route is between Luang Prabang and Vientiane, then Vientiane to Pakse.

The Northern part of Laos is mostly mountainous. Although the main road (Road 13) leading to the north from Vientiane is sealed, a large part of it winds through hills. So… travelling by bus to the north can be hard for those with motion sickness, but that can be countered by the magnificent views.

Generally your cross country bus travel should be a pleasant experience.

However some roads connecting other provinces less travelled are not as good. Some roads are not paved and are bumpy, and in most Northern provinces the roads wind through hills, which makes trips range from less comfortable to tough.

From Vientiane to the north

From Vientiane to the south