Awk Phansa Festival (end of Buddhist lent) takes place on the last day of the Buddhist lent. It occurs in October, three months after Khao Phansa, on the 15th day (full moon) of the 11th month of the lunar calendar. It is a day of many celebrations, most notably the boat race festival held in Vientiane. 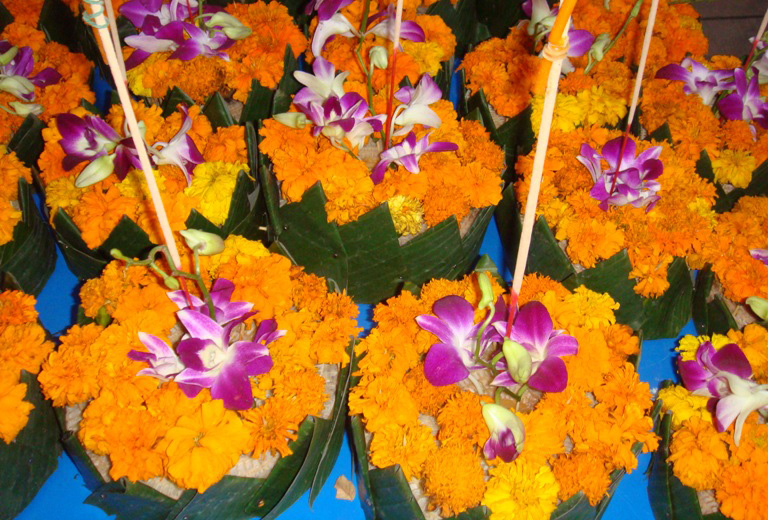 Decorated Ka Thong ready to be sent down the river

On the full moon day at dawn, donations and offerings are made at temples around the country; in the evening, candlelight processions are held around the temples and it is the celebration of lai heua fai or Loi ka thong, when everyone sends small lighted ‘boats’ made of banana stems or banana leaves decorated with candles and flowers down the rivers.


These are said to pay respect to the Buddha and to thank the mother of rivers for providing water for our lives. Some believe that the lai heua fai procession is an act to pay respect to Nagas that lives in the rivers, while others send the lighted boats down the river to ask for blessing and to float bad luck of the past year away enabling the good luck to flow in. Most towns with a river bank nearby will engage in this lovely ceremony. In bigger towns there are also processions of lighted boats, and the ceremony is more popular especially among young romantic couples. Villagers who live far from rivers set up model boats (made of banana stems) decorated with flowers and candlelight, while others simply light up some candles in front of their houses and do their little prayer wishing for good luck. This colorful rituals have been carried on by Lao people for thousands of years. 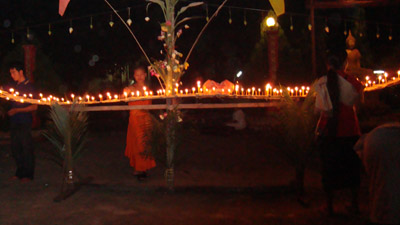 In addition, the evening of the Awk Phansa day is the day the celebrated Naga fireballs are supposed to appear. The Naga fireballs are a phenomenon peculiar to the Mekong. The Naga is a mythical water dragon believed to live in the Mekong and on the night of 15th day of 11th month in the Lao lunar calendar at the end of Buddhist Lent he is supposed to shoot up pink-red fireballs to signify the occasion. Some believe, while others doubt they are real. Learn more ››

Still today there is a festival surrounding this time and certain areas of both the Thai and Lao sides of the river are packed out with willing sightseers, who also take the time to enjoy the multitude of food and drink stands which spring up to cater for them during their wait.

This extraordinary phenomenon occurs in the area of the Mekong River stretching over 20km between Pak-Ngeum district, about 80km south of the Lao capital Vientiane, and Phonephisai district in Nong Khai province, Thailand.  In Laos you can hire a private taxi or truck to take you and from the site, but be prepared for traffic jams and crowds.

The day of the boat racing festival in Vientiane is spectacular. This year (2018), the Awk Phansa festival day (the day the Buddhist lent ends) falls on the 24th October and the Vientiane boat racing day is on the 25th.

The town comes alive with noise and festivity as the teams make their way to the river either by truck or walking, banging drums and singing. The races start around 9am when the heats kick off. Thousands of spectators cram along the river banks and cheer their teams. The streets are lined with food stalls, sideshows where you can win small prizes and stalls selling all manner of clothes and other items.

The final happens around mid-afternoon, by which time everyone is normally quite merry.